Dill, referred to as dill weed, is a culinary herb found in Europe, Western Africa and Central Asia, growing in fertile soil with warm summer climate. Scientifically known as Anethum Graveolens, belonging to the family of Apiaceae, dill is an aromatic perennial herb, of which fruits, leaves and seeds are used for seasoning food.

It adds unique warm and sharp flavor to soups, sauces, pickles, salads and many other dishes. The flavor is especially relished with fish and pickled cucumbers which gives them an exotic spicy taste. Dill seeds are soaked in vinegar to produce dill vinegar which is used as dressing.

Due to its exceptional medicinal properties, dill has been used by mankind in treating various diseases since ancient times. Hippocrates had used it in preparation of medicine to clean mouth. It has been mentioned in Bible and known to have been used by ancient Egyptians, Greeks and Romans. It has also found mention by Pliny the elder and Alfric, the Archbishop of Canterbury in 10th century, in their literary work. 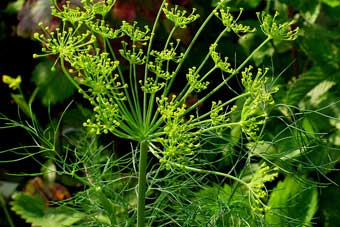 Dill is an umbelliferous herb with digestive, pungent, anti-bacterial, anti-gastritis, anti-microbial, muscle relaxant, coolant and diuretic properties which has given it a good medicinal value. The health benefits of dill weed are due to the presence of components like monoterpenes, falvonoids, eugenol, limonene, phellandrene, furanocoumarins and antioxidants which are essential for healthy maintenance of our body.

Dill is also a rich source of riboflavin, folic acid, vitamins A, ß-carotene, niacin, pyridoxine besides vitamin C which helps the body build resistance against infectious agents and harmful free radicals. Fresh dill herb is known to contain 140% of vitamin C and 257% of vitamin A. The high dietary fiber content of dill helps in controlling cholesterol levels in blood.

Gripe water, prepared from fresh dill herb is sold commercially to treat colic and other digestive problems in infants. During middle ages, the medicinal properties of dill made people believe that the herb possessed magical powers, for which it was used as protection against witchcraft, black-magic and enchantments.

Dill herb is used medically in fighting ailments such as:

Dill essential oil has great health benefits due to its bactericidal, hypotensive, stimulant, digestive, anti spasmodic, stomachic, sudorific, carminative, sedative and galactogogue properties which help in treatment of various ailments. The oil is extracted from the seed or whole plant through steam distillation. A component eugenol present in dill oil is an excellent local anesthetic which is also helpful in lowering blood sugar levels.

Dill oil is known to increase secretion of breast milk in lactating mothers.

When diluted with water, known as dill water, it is used to treat flatulent colic in infants and other digestive disorders.

Mash 2 tsp of dried dill seeds. Boil a cup of water and add crushed dill seeds to it. Let it infuse for 10 minutes. Strain and add honey if required for taste. Drinking the tea at least half an hour before meals has great therapeutic benefits. Tea can also be prepared with fresh dill herb instead of seeds.