Melissa, commonly referred to as Lemon balm due to its citrus like fragrance resembling lemon, is a member of mint family. Scientifically known as Melissa officinalis, belonging to Lamiaceae family, it is a perennial plant that blooms with small white, or light yellow flowers during summer. Melissa is Greek word, meaning honeybee, which the plant obtained due to the richness of nectar in its flowers that attracts bees. When rubbed inside the new hive, the balm attracts bees that make it their home; hence it is also known as bee-balm.

Though native to Europe, the herb is commercially grown all over the world now for its use in attracting bees for artificial cultivation of honey, preparation of medicines and cosmetics, as well as in production of furniture polish. Melissa is sold in form of dried leaves, tea, capsules, ointments, extracts, essential oil and tinctures; in addition to being essential part of homeopathy and aromatherapy treatments. 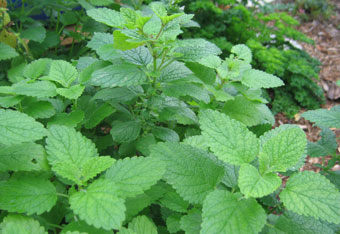 Lemon balm has been mentioned often in the books of history. The herb was very popular as a calming herb during the middle ages, when it was used to effectively treat stress and anxiety. Emperor Charlemagne is said to have been so impressed with the beauty of its leaves that he ordered it to be planted in every garden in monasteries. Llewellyn, Prince of Glamorgan who lived for 108 years is known to have always started his day with lemon balm tea. The famous physician Paracelsus had named Melissa as ‘Elixir of Life’.

The leaves of the herb which are rich in antioxidants are used in preparation of lemon balm supplements like essential oils, tea, infusion and many more. Melissa, the calming herb contains citronellal and citrals A and B, which are effective in treatment of neurological disorders associated with nervousness and tension. Lemon balm also possesses antibacterial property which is used to treat bacterial infections like Listeria.

Melissa leaves are rich in terpene, an aromatic hydrocarbon which acts a relaxant with additional antiviral effects. Tannins, which are brownish or yellowish compound found in Melissa, enhances its antiviral effects, plus they can influence the nutritive value of food by binding and precipitating proteins.

Eugenol present in the herb can heal numbness in tissues, muscle spasms and attack bacterial infections.

Lemon balm is used effectively to treat disorders and diseases like:

Melissa essential oil, obtained by steam distillation of the herb is known to calm down agitated people, reduce increased heartbeats and palpitation, and provide relief from various skin infections.

Lemon balm when combined with valerian is known to be an excellent tranquilizer which can provide relief from long standing nervous problems accompanied by anxiety, depression and stress. The natural remedy does not have any side-effects.

Add boiling water to fresh or dried lemon balm leaves and infuse it for some time. Breaking the leaves before adding them to boiling water releases the flavor and oils in them. Strain if you do not like to have leaves in your tea. It can be taken either hot or cold with a dash of honey and lemon to enhance its taste.