Brier Hip is a deciduous shrub, belonging to the family Rosaceae, botanically known as Rosa Canina, which is a variation of wild rose. It grows in Europe, Australasia, Western Asia, and northwest African regions. It is small plant that reaches a height of 2-13 feet, with stems that are covered with sharp spines and prickles.

The oblong, reddish fruits of the shrub containing one seeded achenes, are used in preparation of tea, marmalade, wine and syrup. The hips are used to enhance the taste and flavor of fruit juices. They are used to produce rosewater and glycerin which are very effective cosmetics since ancient time.

The fruits are harvested in the months of August and September when they turn scarlet in color. The health benefits and fragrance of the shrub has seen its extensive use in production of perfumes, cosmetics and herbal medicines.

In ancient times, the plant was used as an effective remedy against rabies, which may have got it the name Rosa Canina meaning dog’s rose, and also the names like dogberry and witches’ briar. 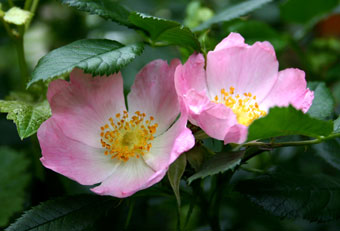 Originally used as ornamental flower nearly 3,000 years ago, at present the shrub is cultivated or collected from wild for its well known medicinal properties. The nourishing brier tea, also known as rose tea, not only provides essential nutrients to the body, but also increases its immunity, thus protecting it against diseases. Regular consumption of Brier hip is known to increase peripheral blood circulation.

The astringent, carminative, stringent, laxative and diuretic properties of the herb make it an excellent remedy for bladder inflammation, stomach disorders and diseases related to kidneys. The herb is a rich source of vitamin C, as well as vitamins A, B1, B2, P, K, E, flavanoids, tannins, organic acids, pectin Calcium, Phosphorus, Iron and Zinc.

The medicinal properties of the herb Hip Brier has seen it being extensively used to treat diseases like:

Shred brier hips and remove the seeds. Pour boiling water over the shredded hips and allow them macerate overnight. Add sugar and boil the hips until it reaches the consistency of syrup. The delicious dish is excellent for healing the body and increasing hemoglobin content in blood.

Nyponsoppa or the Rose Hip Soup

Nyponsoppa is a popular homemade Rose Hip soup of Sweden, which is rich in flavor and taste.

It is often served with biscuits, whipped cream, vanilla ice-cream or drinks. Rose hip soup is excellent for convalescent patients as it is rich in vitamin C which helps in their recovery.

Crush fresh brier hips. Bring water to boil and add the fruit to boiling water so that there will be no loss of vitamin C. Strain and drink the concoction which can provide relief from anemia, headaches, fatigue, and hepatic pains.

The tea prepared from the seeds of brier hip instead of fruit is an excellent diuretic which can provide relief from kidney and bladder diseases.