Chamomile, also known as Camomile is a daisy like plant, though smaller in size, belonging to the family of Asteraceae. The name is derived from Greek words, which roughly translates as apple of ground, because of its aroma strongly resembling that of an apple.

Of the different varieties of plants referred to as Chamomile, the herb chamomile belonging to Matricaria genus and Chamaemelum nobile comes with various health benefits. Careful selection of proper species of chamomile is important, as some other herbs belonging to the family are known to have unhealthy effects like allergies on human body.

Chamomile is often gathered from the wild, washed thoroughly, dried and stored to prepare chamomile tea which is very popular in Greece. Chamomile herb has been used for its medicinal properties since ancient times for treating various human ailments. It is one of the oldest documented medicinal herbs known to mankind.

The plant is also used in preparation of chamomile essential oil which is extensively used in cosmetic products and aromatherapy. The herb is also known to heal other sickly plants in the garden when planted or kept near them. 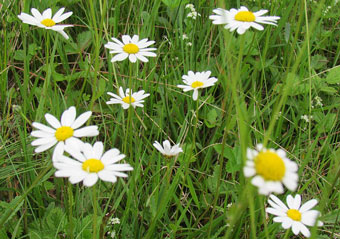 Chamomile has been known among many ancient cultures for its curative, preventive and therapeutic properties, which promotes good health. Chamomile tea, essential oil and extractions are used in treatment of various human ailments successfully.

The effectiveness of chamomile in healing human body through its anti-inflammatory, antimicrobial, anti-spasmodic, and relaxing properties has been substantiated by scientific research which has increased its popularity; now the consumption of chamomile herbal tea has exceeded 1 million cups per day.

Chamomile is wonderful drug in healing stomach disorders which can safely be administered even to children. It can induce sleep with its mild sedative properties without risk of dependency or the harmful side effects. In treating eczema, the effectiveness of chamomile has surpassed even the standard treatment of hydrocortisone cream.

Chamomile is used in treatment of diseases such as:

Pregnant women and nursing mothers are advised not to consume chamomile. Also people who are on sedatives or have allergies should consult their doctors before including chamomile in their regular diet.

Chamomile essential oil is used in aromatherapy and cosmetics for its amazing properties which is highly beneficial to human body. Inhaling vaporized chamomile essential oils relieves anxiety, depression and asthma. The penetrative ability of the oil which reaches deeper layer of the skin has seen its use as topical anti-inflammatory and anti-septic agent.

Boil water and add some dried chamomile to it. Cover the vessel and boil it some more, so that the medicinal value of chamomile will not be lost due to evaporation. Let the brew cool down without opening the lid. Strain the mixture and drink it as tea. Ginger, honey and lemon can be added to increase the taste, flavor and health benefits.

The sores in the mouth caused by the after effects of chemotherapy can be healed by rinsing the mouth with diluted chamomile extract. It is also known to provide relief from other sores and ulcers in the mouth.