The coconut palm, scientifically known as Cocos Nucifera belongs to the Arecaceae family of palms, which is widely grown in the tropical regions. The tall palm with cylindrical trunk which can reach the height of 100 feet has leaves and 10-20 clusters of nuts at the summit. Coconut is hard-shelled, single seeded fruit, with solid white oily flesh and a hollow core filled with sweet water rich in eclectrolytes. It is known as functional food because the health benefits of the coconut are not limited to its nutritional values, but goes way beyond it.

The flesh of the coconut is widely used in cooking whereas the water of tender coconut is consumed for quenching thirst and for its various health benefits. The dried flesh is used as copra, which yields the valuable coconut oil used commercially in production of cooking oil, soaps, candles, hair oils and moisturizers.

No part of the coconut palm goes to waste, as the dried leaves are used for thatch, making mats, screens and baskets. The coir is used in manufacture of ropes, door mats and beddings. The trunk gives wood where as the sap is fermented to produce palm wine, spirituous liquor. No wonder the Pacific Islanders refer to the coconut palm as the ‘Tree of Life’ as they believe that it has cure for all illnesses. 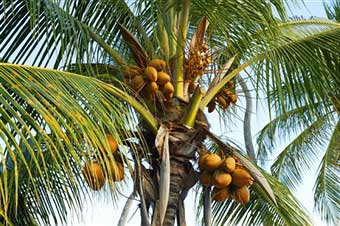 Coconut not only adds taste to the recipe, in addition it supplements the dish with fiber, nutrition, vitamins and minerals. It is also a rich source of amino acids, calcium, potassium, protein, fatty acid, electrolytes and magnesium. Regular consumption of coconut boosts immunity, whereas the antiviral, antifungal and antibacterial properties of the fruit will help in maintenance of overall good health. It is also known to provide relief from bacterial, viral, fungal or parasitic infections due to high anti-parasitic property.

Coconut is a boon for people who are lactose intolerant, as its consumption improves the body’s ability in absorbing calcium and magnesium, thus aiding in development of strong bones and teeth.

Coconut is known to fight illnesses such as:

As the matured coconut has less amount of water, often the immature fruit is harvested to provide refreshing drink in the humid tropic regions. Due to its health benefits and nutritional value, it is fast gaining popularity as a sports and health drink. Research has proven that the coconut water has the same electrolyte levels as the human plasma, which has seen it being used for plasma transfusions.

Coconut oil is preferred as cooking oil by many, because it is known to reduce weight, even when some contradict the belief. Through rich in saturated fatty acids, the medium-chain triglycerides are easy to digest making it preferable over other oils. The people of Asia and Pacific islanders have extensively used the coconut oil in traditional medicines. The oil which is a source of lauric, capric and caprylic acids comes with great benefits of hair and skin care, relief from stress, help in metabolism, provide relief from kidney, heart and digestive problems and improve bone strength, to name a few.